Greek symphonic death metal masters SEPTICFLESH will release their "Infernus Sinfonica MMXIX" performance on Blu-ray and DVD on July 31 via Season Of Mist. The full concert was taped in February 2019 during a sold-out show at the Metropolitan Theater in Mexico City. The unforgettable night was the largest production of its kind at the venue, which included the band, over 100 musicians from the Symphonic Experience Orchestra, the Enharmonía Vocalis Choir, and the National University of Mexico Children's and Youth Choir.SEPTICFLESH comments on the release: "On the 2nd of February 2019, a historic for SEPTICFLESH show took place in Mexico City at a fully packed Metropolitan Theater. For the first time and with the help of over 100 musicians, our songs were performed live in their full symphonic glory. The whole show was recorded and now it is time to present it to all our fans in a DVD/Blu-ray 5.1 entitled 'Infernus Sinfonica MMXIX' that will be released from Season Of Mist. We are grateful to all people that made this experience possible and success!""Infernus Sinfonica MMXIX" track listing:01. Intro02. Portrait Of A Headless Man03. Martyr04. Prototype05. The Pyramid God06. The Enemy Of Truth07. Communion08. The Vampire From Nazareth09. Dogma Of Prometheus10. Lovecraft's Death11. Dante's Inferno12. Persepolis13. A Great Mass Of Death14. Anubis15. Dark ArtSEPTICFLESH's latest album, 2017's "Codex Omega", was the band's first release to feature former DECAPITATED drummer Kerim "Krimh" Lechner. Months of hard work and experimentation crafted the disc and resulted in 10 compositions of dark sonic bliss. The effort was helmed by acclaimed metal producer Jens Bogren (OPETH, AMON AMARTH, KREATOR).SEPTICFLESH guitarist Christos Antoniou told Metal Wani about the response to "Codex Omega": "It might sound cliché, but for us, 'Codex' is the best album that we've done up until now. The press and the feedback from the fans is great. The press, as I said, everyone says that it's a great album for us and we're really happy about it. And, it also makes us even stronger to create something new, the successor to 'Codex Omega'."As for what type of musical direction SEPTICFLESH's next studio album will take, Christos said: "We are a symphonic band, established as a symphonic metal band. We will try as always, to create something interesting, something new that compares with our previous releases and to create a fresh sound. You cannot change your style radically, but a good album is always a good album. If you don't repeat yourself, then you are on a good path. We have always this competition with 'Communion', 'The Great Mass', 'Titan' and now 'Codex Omega'. It works in our favor. It's going to be a tough task to [top] 'Codex Omega', but I'm very optimistic." 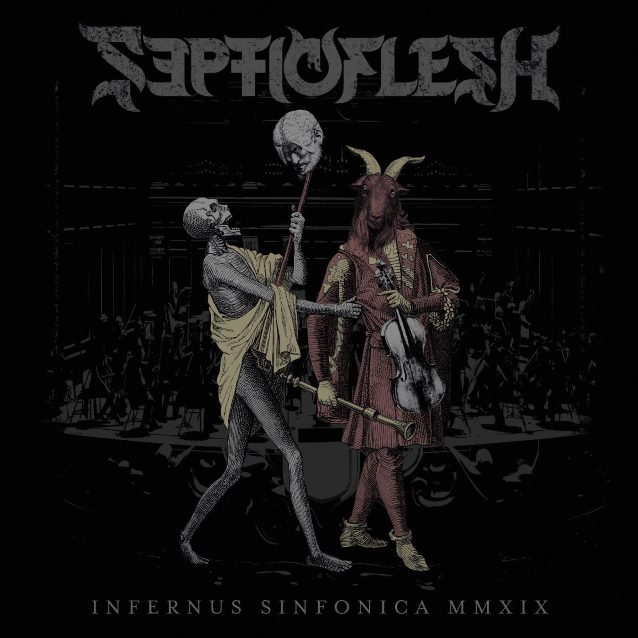